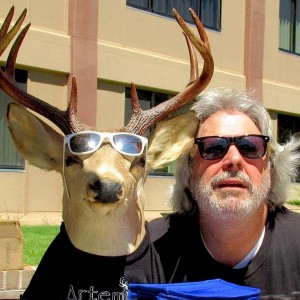 Comedian/satirist — Howie Nave has been doing the funny thing for years now compiling his body of work on albums, CDs and a ‘live’ stand up DVD entitled, “Howie Nave….Live From Lake Tahoe.” Over the years working the road Howie has opened for some pretty impressive entertainers ranging from Neil Young, Trisha Yearwood, Johnny Cash, Asleep At The Wheel to Kathy Mattea, Howie Mandell, Louie Anderson, Robin Williams, Soupy Sales (yes!) and “Weird Al” Yankovic to name a few. Howie also does film reviews from a comedic perspective called “A Jew Doing a Movie Review” where if the movie is excellent gets a 5 out of 5 bagel rating (with a lox spread). Howie would review flicks while working the road calling into radio stations across the country and eventually led to a permanent gig here in Lake Tahoe where he has his own number one radio show called ‘Howie’s Morning Rush’ on KRLT 93-9 The Lake.
In addition to the his live comedy Howie also has the number one morning radio show in Lake Tahoe called “Howie’s Morning Rush” on KRLT 93-9 The Lake and also writes for several online and print publications. His parody songs can be heard across the country today but were first heard on the nationally syndicated “Dr. Demento” radio program. Some of his original compositions include “Your Father Was Once my Mother,” “I was Born the Wrong Religion all Because of Circumcision,” “I Want a Part Time Girl for Christmas,” “It’s Hard to be a Jewish Cowboy When You Want to Date a Country Girl,” “Freaks on the Internet” and “Post Academia Blues” which was written after he graduated from Humboldt State University. Howie is also a big Sci-fi fan having hosted numerous Star Trek conventions in addition to the annual Roswell, New Mexico Alien Encounter Extravaganza that takes place every 4th of July weekend.

Nave has appeared on NBC’s “Last Comic Standing,” Comedy Central in addition to appearing at numerous comedy festivals both in the United States and abroad.  When not touring Howie is active in his community hosting a series of benefit shows for the Hurricane Katrina Relief Fund, organizing a comedy golf tournament (and comedy performances) for the Make-A-Wish Foundation, The Relay-for-Life American Cancer and Leukemia/Lymphoma Society and most recently for the Angora Fire survivors in South Lake Tahoe.

Howie is also featured in the comic cookbook, “From the Stage to the Stove” where comedians share their favorite recipes from all over the country while working the road. Howie makes a killer spaghetti sauce that is the envy of other comedians as well as fans of pasta and even has a recipe for vegetarians too. When he gets some time off he likes to be a hermit spending time in his cabin with his dogs in the high Sierra.

What an amazing artist, @DemiLovato who made an emotional appearance at the Grammys tonight performing, “Anyone” a song that was written and recorded just days before she was hospitalized for a drug overdose. Very moving and what a voice❤️

The visuals just looking at the audience was the best part as their facial expressions pretty said it all!

I wrote this monologue when I should’ve been relaxing & getting drunk at Xmas. No wonder it sounded angry 😂What was your favourite joke? https://t.co/wcnDjcyXQ3

Episode 263 is up on Howie's High Sierra Comedy Vault Podcast @ https://t.co/J3moEWReC8 with good friend ⁦@thenickgriffin⁩ This, my friends is a good one that includes some of Nick’s classic bits and yes we, talk about how his failed relationships = great comedy & laughs!

Reply on TwitterRetweet on TwitterLike on TwitterTwitter
Load More...